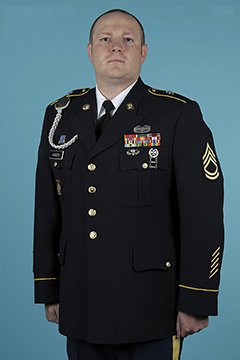 While deployed to Afghanistan in 2003-2004, Staff Sergeant Hansen was sent out on a mission from Kabul with Army Special Forces. On the way back they passed through the Panjshir Valley. This valley has a river running down it and has tall mountains on either side. In the mission briefing they had been warned to be on the lookout as the Taliban were very active in the area they were passing though. The enemy started shooting rockets from the hills above the road at the convoy. Hansen was driving the lead vehicle and as he rounded a corner the enemy had parked two vehicles blocking the road and were shooting at his vehicle. The machine gunners on the vehicles were engaged with those shooting rockets at them and did not see the road block or those shooting at them from the front. Hansen down shifted, sped up, and rammed those shooting at him, running over the shooters and ramming the vehicles off the road to get out of the ambush.

On another mission with special operations forces he landed at a remote location and the special ops people were nowhere in sight to pick him up. There was a conventional Army unit at the location so they invited him to go to their FOB (forward operations base) to wait. While waiting at the FOB to link up with his special operations contact rockets were fired at the base and he ended up getting into four firefights before his colonel showed up and asked if they had one of his guys there.

Another time, while out on patrol, they became disoriented and the captain in charged pulled into a village and asked a villager where they were on the map and how to get back to base. It was not a good idea to follow the directions from the villager. After leaving, a short distance away from the village, they were ambushed by enemy using rockets and small arms. Hansen and another gunner laid down suppressing fire and they were able to go back down the road and escape the ambush.

In Afghanistan when someone in his unit had a birthday they would grab them and duck tape them to a stretcher and shave their head and then take them to the mess hall and while still duck taped to the stretcher, stand them up against the wall near the door so everyone could wish them a happy birthday.

He also severed for a year in the Philippines in 2006 and then in Iraq in 2010 to 2011. Hansen is still in the Utah Army National Guard and works full-time for the military as a Noncommissioned Officer trainer and the site security officer for the 640th Regimental Training Institute at Camp Williams.

A quote:
“No plan survives contact with the enemy”