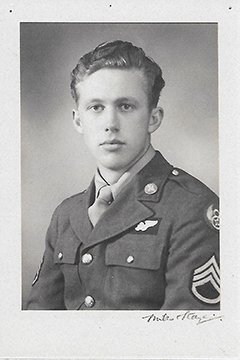 James Holyoak was born in Cedar City, Utah, as an only child. He lived in Milford, but went to Cedar City High School. In October of his senior year, he enlisted in the Army Air Corp with the understanding that he would be allowed to finish high school. But the call came to report for duty Jan. 21, 1944, and if his grades were high, he would be given his high school diploma. So at the age of 17, he reported to Fort Douglas and was sent to Buckley Field in Colorado for basic training.

Holyoak went to Kingman, Arizona, was assigned to a B-17, and sent to gunnery school. In Lincoln, Nebraska, he met his crew of 10, and received overseas training in Rapid City, South Dakota. Holyoak was assigned to be the belly turret gunner. In October 1944, Holyoak went to England and the 8th Air Force via New Hampshire, Labrador, Iceland, and Wales. He was stationed at Deopham Green Air Base with the 452nd Bomb Group.

From October to April, Holyoak completed 34 combat missions over Germany, the final 10 missions in 11 days. Holyoak’s missions were always accompanied by P-51 fighter escorts for protection except for one mission over Hamburg, Germany. An unusually strong jet stream caused them to get blown off-course and the P-51 escorts could not find them. Waves of German Focke-Wulf and Messerschmitt were soon firing at them. Holyoak witnessed five B-17s carrying several close friends lose wings, engines, and tails. They fell into unrecoverable flat spins and exploded. The 452nd lost 50 men that day.

Bombing missions were the worst over Berlin. The skies were filled with the black smoke of anti-aircraft artillery. The crew usually returned to England with holes punched through the plane from bullets and shrapnel. From February to May 1944, the 452nd lost over 200 B-17 aircraft due to enemy action or operational incidents. Holyoak remembers the fear inherent with each mission and knew if the plane went down, he would go with it. He couldn’t wear a parachute in the tight confines of the ball turret. He was 18 and turned 19 years old during this time.

Due to the heavy demands placed on the aircraft, mechanical failures were inevitable. B-17s that were carrying a full load of heavy bombs would take off, only to quickly experience engine trouble. The planes would be ordered to fly out over the English Channel to drop the load of bombs to avoid a possible crash landing with the bombs still in the bomb bay. Many did not return. During one particular mission, Holyoak’s plane lost an engine, causing it to fall behind the rest of the flight. Enemy aircraft looked for these planes as they were easy targets to shoot down. Holyoak remembers the gratitude he felt when two P-51s showed up with their wheels down and flaps lowered to match the slower airspeed of the B-17. The two fighter jets stayed with the disabled B-17 until it had reached safety. Holyoak never felt so happy to see the White Cliffs of Dover.

Despite being a telegraph operator that would have kept him from going overseas, Holyoak related, “I felt the future of my country was at stake and I had to serve. It was one of the highlights of my life. I’m proud I could do it. I have good memories, being as I survived.”

Holyoak worked for the Union Pacific Railroad for 42 years. He is the father of three sons, 12 grandchildren, and 24 great-grandchildren.