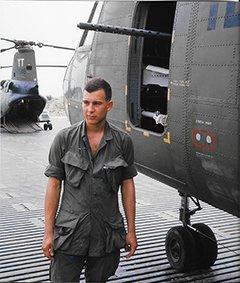 Layne R. Meacham joined the Marine Corps in September 1967, when he was 19 years old. In January 1968, Meacham was sent to Vietnam where he trained as a radio operator before being stationed at Khe Sanh with A Company, First Shore Party Battalion, First Marine Division. Meacham carried out his responsibilities as radio operator on combat patrols with his PRC 25, a very heavy man-packed radio. He remembered being under small-arms and mortar fire constantly while at Khe Sanh. It was during one of these barrages of artillery that Meacham demonstrated his bravery, and his commitment to his fellow Marines in such a way that he was awarded the Bronze Star Medal for Valor. On May 27th, 1968, he was in his bunker during an artillery attack when suddenly all the grunts came rushing off the lines for cover. Despite the threat of artillery fire and an apparent possibility of being overrun by the enemy, Meacham quickly grabbed battle dressings and ran out to assist wounded men.  After maneuvering across 50 meters of terrain while under intense artillery fire, he assisted two injured Marines and ensured that they were moved to a covered position.  He then crossed the hazardous area again to assist a remaining casualty.  Meacham dressed the man’s wounds as best he could, placed him on a stretcher, and moved the wounded Marine to a bunker where he received medical aid.  The lives of several Marines were saved as a result of Meacham’s efforts.

Meacham also served at Cua Viet Base where he coordinated helicopter landings, and went out on missions as a radio operator with other units. He also unloaded cargo in Danang, where he was wounded by shrapnel when a nearby ammunition storage site exploded. Meacham made a full recovery, and finished his enlistment in May 1969. After returning home, Meacham attended Columbia University, and then earned his Masters of Social Work from the University of Utah. He worked in juvenile and adult corrections as a social worker, and even served in a Nevada maximum-security prison. He also became a teacher, and a successful painter, and was honored by the 2002 Winter Olympic Cultural Committee as one of the 100 Most Honored Artists of Utah. Meacham called his service in Vietnam “the defining point in my life,” and said, “I’d do it again,” still exemplifying a commitment to his country, and to his fellow Marines.