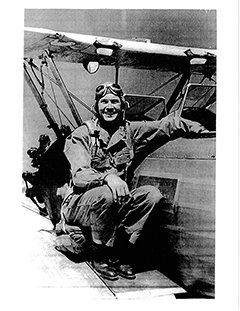 In December 1942, Roy Stapp from Marysvale, Utah, marched down to the Army enlistment office and signed up for the Army Air Corps. He admitted he was somewhat surprised when he passed all the tests and was accepted for flight training. During the early stages he met Norm Stromness (1999 awardee) and Keith Russon, also Utahns, who were linked the rest of their lives.

Stapp and his buddies made it through all phases of flight training. But when it came time for the class to transition to planes they would be flying in combat up popped an alphabetical snag. There were50 cadets in the class, but only 25 B-25s. So the first half of the class, alphabetically, were assigned to them. The bottom half, which Stapp, along with his friends, were relegated to transitioning with aircraft not being used in the European Theater.

Assigned to the 17th Bomb Group, 432nd Bomb Squadron in Italy, Stapp said the meeting with their first commander was “interesting.” After a few minutes he said he had no use for them, they were nothing but a bunch of air “cadets.” To this day Stapp is fond of pointing out that those three “cadets” ended up flying a total of 158 combat missions.

The three all piloted B-26 Marauders, a medium altitude bomber, with several well deserved nicknames, among them Widow Maker and B-Dash-Crash. Simply put, it required an abnormal amount of ground speed to lift the planes into the air and they had to land at speeds of up to 135 miles per hour. A large number of people died learning how to fly the B-26
Stapp said most runways they flew from had long steel extensions at either end. When you no longer heard your wheels on the runway, “you pulled the control column back and hoped you got off the ground.”

Perhaps his most memorable mission was against a bridge over the Rhine River. The Germans were desperately trying to save it to move their artillery back into Germany. The target was obscured by smoke, but the bombardier got a long enough glimpse of the bridge to drop the bomb load.

The flak was heavy and jolted the plane so hard Stapp came out of his seat and hit his head on the cockpit ceiling. Following the mission the ground crew counted 110 bullet holes in the plane. Stapp said the flak was so thick you could smell the gun powder in the cockpit.

He said they were rarely attacked by German fighters because of the tight formations his group flew. There was no way the enemy could get close enough to engage without being hit by a barrage of machine gun bullets.

By war’s end he and his crews had earned seven Air Medals and various other commendations.

Stapp, Stromness, and Russon all returned to Utah. Stapp joined the Utah Air National Guard and retired as a full colonel after 22 years of service.

He said, “looking back I never had any thoughts I wasn’t coming back.” As for the three cadets, Stapp said “we stayed close until they passed away a few years ago.”

“When those two passed away there was a big void. It’s hard not to have them around.”