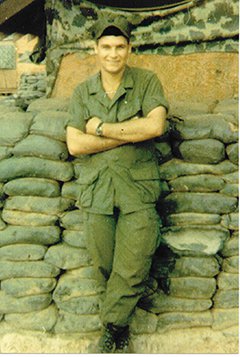 Like many American men who came of age in the late 1960s, Larry Turner honorably served his country in the Vietnam War. However, Turner’s story is unique in that it does not end there. Instead, it includes almost four decades of service in two additional operations, Desert Storm and Enduring Freedom.

Turner was 18 years old in the summer of 1966 when he received his draft notice. Knowing that he would have to serve, Turner instead decided to enlist so that he could be in the Navy. “I looked at it as it might be fun to be a sailor,” he said. However, Turner spent less than one month on a ship before he began serving on the ground with the Marine Corps as a corpsman.
After completing his medical training and first assignment at Camp Pendleton, Turner received orders to the 3rd Marine Division in Southeast Asia.

Upon arriving at the division headquarters at Quang Tri, Vietnam, Turner and a friend—who he had been with from corps school to Camp Pendleton—chose to serve with the 3rd Reconnaissance in a security mission. This assignment frequently put Turner and his friend in danger as they would attempt to secure strategic positions.

In one such mission in February 1969, Turner and the rest of the unit were ordered to secure a hilltop that had been abandoned by the Marines about a month earlier. However, they were shot out before they even made it to the ground. Unfortunately, Turner’s friend did not survive this operation.

Just three weeks later in March 1969, Turner and 11 other Marines again found themselves in a similar situation. They were attacked while attempting to secure a fire support base on top of a hill. Turner was one of only two men who made it off the hill unwounded. For his service, Turner was awarded a Bronze Star with Valor.

Turner served two more years in the reserves after completing his tour in Vietnam—finishing, or so he thought, a proud tour of military service. However, after coming home, marrying his wife Melody, and having two sons, Turner once again decided to serve his country as a hospital corpsman in the Navy in 1984. Turner served almost two decades in his second stint with the military, seeing action in operations Desert Storm and Enduring Freedom before finally retiring in 2003.