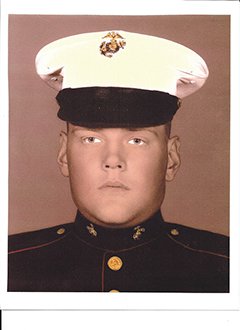 Jay Dee Wells was in the Marine Corps from November 1965 to December 1969 with the 2nd Battalion, 5th Regiment. The 2/5 is the most highly decorated battalion in the Marine Corps and their motto is, “Retreat, Hell!” He was in Vietnam and in combat from March 1968 to December 1969. During his period of combat in Vietnam there were at least 17 combat operations. Of those 17 he was directly involved with seven of them.

Wells does not talk of combat, which in any war is brutal, but of the different ways he and his fellow Marines tried to help the local people. They helped the locals by teaching them, giving them jobs (with pay), and helping with extra food. Only once did Wells “enjoy” killing the enemy and that was when he found out that the Viet Cong had killed a group of kids that he and others of his unit had befriended and helped in a village. He was able to get on a medevac helicopter going to the area as a gunner. He spoke with great emotion of the friendship he and the unit had with the kids that were killed because they would NOT toss or take grenades into and kill the Marines in the classroom.

Wells is active with veterans especially in the Ogden area. He is part of the local Purple Heart Association and is actively looking for Utah Purple Heart recipients to have their names inscribed on the granite monuments at the Wahlen Veterans Home in Ogden. He helped bring the Chapter 1159 of the Marine Corps League back to life, and is involved in helping Boy Scouts with Eagle Projects. He also is involved with fund raising for the Wounded Warriors project.