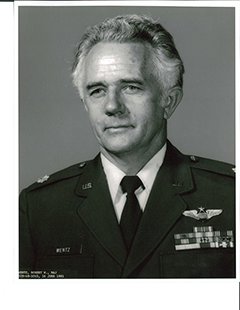 Robert W. Wentz joined the Air Force in 1950 at 17 years old. He spent four years as an enlisted soldier and separated from the service as a Staff Sergeant to attend college. After graduating from Brigham Young University he reentered the Air Force, was commissioned as a 2nd Lieutenant and a navigator. He eventually became a navigator instructor and flight examiner. In addition to his position as an instructor, Wentz was assigned to base operations and flew supply missions to embassies in Guatemala, Puerto Rico, Colombia, Bolivia, and Peru.

In 1966, Wentz was assigned to the Republic of Vietnam. During his time in Vietnam, Wentz’s bravery and skill ensured that he and many of his fellow soldiers returned home safely. Wentz and his crew dropped flares to light the battlefield for the army at night. On a mission to provide illumination for a conflict on an island on the Nha Trang River, Wentz displayed professional competence, aerial skill, and devotion to duty that earned him the Distinguished Flying Cross. As clouds started rolling in, Wentz and his crew were forced to fly lower and lower while at the same time coming under fire from anti-aircraft guns, as well as friendly fire. Wentz navigated a safe route away from the anti-aircraft and friendly fire, through the poor weather conditions, barely avoiding the dangerous mountain terrain. Wentz said of his efforts, “That was just part of my job, guiding the airplane.” In addition to avoiding catastrophe and providing illumination to the army below, Wentz’s airplane dropped more flares in one 24-hour period than had ever been done before. Wentz flew many missions to provide essential support for the army, receiving the Air Medal with five Oak LeafClusters for his many aerial accomplishments.

Though his service commitment ended in 1964, Wentz decided to stay another year and joined the active reserve. During his time in the Air Force reserve Wentz flew as a navigator on cargo planes out of Hill Air Force Base, flying back to Vietnam several times during the course of his assignment. When Wentz’s unit changed its mission from transport airplanes to fighters he became the Chief of Intelligence for the 466 Tactical Fighter Squadron at Hill Air Force Base. He held the position for eight years until he retired after 23 years of service.