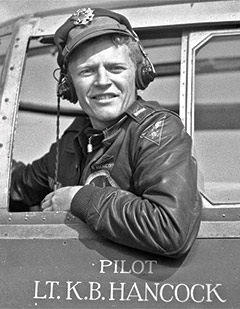 As a kid growing up in Wichita, Kansas, Kenneth Hancock was entranced by flight. With every three dollars he earned as a delivery boy for a local drug store he would sneak off to the local airfield for 30 minutes of flight time and instruction. At 16 years old he revealed to his parents what he had been doing and obtained his private pilot’s license. There was little question, then, that with the outbreak of World War II Hancock would enlist in the Army Air Corps.

Hancock shipped out for Italy in July 1944 expecting to fly transport planes during Operation Dragoon, the invasion of Southern France. Instead he and his fellow pilots were “requisitioned” by General John K. Cannon and he found himself flying B-25 Mitchell bombers off of Corsica as part of the 489th Bombardment Squadron of the 340th Bombardment Group.

The 489th’s most common objective was the Brenner Pass on the Italian-Austrian border. The pilots flew the agile B-25 – “the best airplane made” in Hancock’s estimation – through alpine canyons to hit their targets. Still, Hancock remembered that the missions were not without their risks. “Hardly a mission went by when we didn’t get shot up,” he said.

One of his most harrowing missions was an attack on the heavily defended railroad marshaling yards at Milan. The anti-aircraft fire was so intense that the crew was driven back from the mission two days in a row. Hancock recalls that it wasn’t pleasant going to sleep at night knowing you were going back the next day. On the third attempt they destroyed the target.

Hancock received the Distinguished Flying Cross for his role in a February 1945 mission to attack the strategic Vipiteno Bridge in the Brenner Pass area. Heavy anti-aircraft fire during the mission brought down three planes and heavily damaged others, including Hancock’s. His Distinguished Flying Cross citation sums the experience up well. “Determinedly maintaining his crippled plane on course, Hancock enabled his bombardier to release his bombs … upon this vital bridge.” Then, flying with “vigorous evasive action … he cleared the danger zone and returned his shattered bomber safely to base.”

In addition to the Distinguished Flying Cross, Hancock also received the Purple Heart for wounds sustained on March 7, 1945, during a mission to Peri, Italy. The lead plane in the group exploded, sending shrapnel into Hancock’s plane. Several pieces came through the windshield, hitting him above the eye and lodging one in his flak jacket. Hancock notes that only three of the six men in the lead plane got out before the explosion. The following day he flew his 66th and final combat mission.

Hancock left active duty in August 1945, but remained in the Air Force Reserve until 1960. After working as a flight instructor for a time he went onto a career as an air traffic controller and supervisor for the FAA.