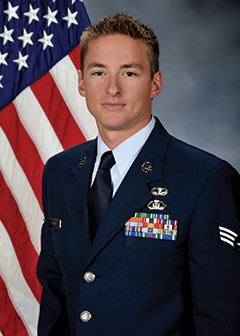 After helping his brother Bryant recover from life-threatening injuries sustained during his deployment in Iraq, Zachary Jacobs decided to join the Air Force in 2005. He received his basic training at Lackland AFB in Texas, advanced training at Hurlburt Field in Florida, and then completed jump school and survival training before being assigned to the 14th Air Support Operations Squadron.

Jacobs deployed to Afghanistan three times over four years. His first deployment began in August 2007 and lasted nine months. While there, he ordered airstrikes in support of combat missions and served as the liaison between ground combat troops and the Air Force as a Joint Terminal Air Controller (JTAC) to provide air assistance and cover when needed. He also completed a three-week mission to assist in clearing an area of all Taliban.

His second deployment was for 12 months and began in August 2009. He was first at FOB (forward operating base) Apache in the east Kandahar region then was moved to FOB Todd in the Bala Murghab Valley. All supplies had to be air dropped to any U.S. troops. Taliban forces would initiate a fierce offensive when the troops had to recover supplies. “It was like a hornet’s nest. We couldn’t go 200 meters off the FOB without a firefight,” Jacobs said.

During one mission, Jacobs’ unit was asked to go about 10 kilometers from FOB Todd to provide security for a special ops unit. After hiking all night they settled in a compound with three walls; the fourth side was open to a canal and a large hill beyond. At dawn, Taliban fighters engaged the troops with fierce gunfire. The Taliban had tunneled into the hill, effectively trapping the unit. The west side of the compound had a slight one-foot rise of dirt and the U.S. troops took cover there and returned fire, while calling in additional help. Apache helicopters responded by firing Hellfire missiles, but setting off a brush fire which also threatened the unit. Four flights of F-15s, a B-1 Bomber, and a Harrier jet also assisted. The hill was bombed so close to the troops, shrapnel peppered the compound. The special ops unit was in another compound 100 meters to the north. Jacobs’ position was becoming untenable due to low ammunition supplies so he called for intense covering fire while he was point man for the dash to the compound through a wheat field. “The wheat was just flying everywhere due to the rounds being fired at us,” he recalled. One man from the Afghan army was killed and one U.S. soldier was shot and wounded.

Jacobs called for a medical evacuation helicopter, but had to expose himself to enemy fire again to throw signal smoke marking the extraction point. Due to the excellent covering fire, he was not wounded. For these actions, Jacobs was awarded the Bronze Star with “V” for Valor. However, they were not finished. Jacob’s unit, with help from special ops and others were ordered to retake the hill. The fight lasted all night and the next day, as the Taliban counter-attacked. Jacobs continued to call in air support until the hill was secured. The hill was later made a permanent position.

Zach’s third deployment was with a unit of the 10th Mountain Division at COP (combat outpost) Sharch in May 2011. While on patrol, his unit triggered an improvised explosive device (IED). It killed one of the Afghan police officers who was with the unit and wounded two others in the unit. Jacobs was knocked unconscious and his vision and hearing were compromised for a week. Jacobs was the third JTAC to receive a Purple Heart at this COP. Over 90 Purple Hearts were given at this position.

Given the inherent danger of serving in Afghanistan and the nature of Jacobs’ experiences, some might wonder why he chose to redeploy twice, but for Jacobs it simply felt like his duty: “I felt I should. I know my job and I know it well.”