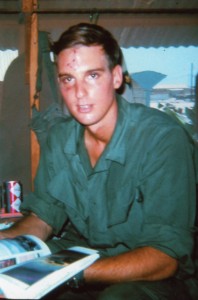 Lawrence Weist was assigned to First Platoon, Company A, 2nd Battalion, 14th Infantry Regiment, 25th Infantry Division, and served in Cu Chi, South Vietnam from December 1967 – March 1969.  On March 6, 1968, Company C of the 2/14th Infantry was ambushed near Trang Bang by elements of the 272nd NVA Regiment. Specialist 4th Class Larry Weist and other soldiers of his 2nd Battalion were flown in to relieve Charlie Company. As Weist’s Huey was 100 feet above the landing zone, it was hit by ground fire and crashed tail first. Weist was knocked unconscious from a serious head wound, thrown from the aircraft and presumed dead. Half of Weist’s squad were killed in assaults on the enemy’s position. Later, after the firefight ended and bodies were being loaded onto helicopters, a medic realized that Weist was still alive. Weist was medevaced to the 12th Evacuation Hospital, was discharged three days later, and he returned to his unit with his head still heavily bandaged.

Two weeks later, Weist and other soldiers of Alpha Company were attacked by elements of the 272nd NVA Regiment in the jungle east of TayNinh City. During this battle, which lasted for 25 hours, Weist and his fellow soldiers were without food or water and all of the company’s officers were killed, wounded, or separated from their men.

During his 16 months in-country, Weist was in many other firefights and was wounded twice. He said, “When you got on a chopper, you didn’t know if the LZ was going to be hot or cold, dusty or muddy. Initially, you were scared and you did a lot of praying. Sometimes in intense combat the normal survival instinct changes to a feeling that it doesn’t matter if you die. It’s hard to believe and hard to explain, but it’s real.”

In December 1967, Weist was assigned to First Platoon, Company A, 2nd Battalion, 14th Infantry Regiment, 25th Infantry Division, and served in Cu Chi, South Vietnam until March 1969.  He said that during his time,“I kept track of the casualty lists that were published in the Stars and Stripes every Thursday. Forty percent of the recruits in my Infantry Advanced Individual Training Company at Fort Polk were killed in Vietnam. I did what we all did who grew up in the ‘50s–I served my country.”