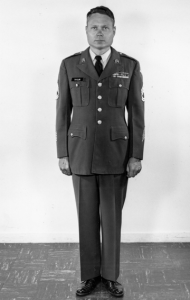 Elton Taylor spent 21 years, 9 months, 22 days in the military serving in World War II, Korea, and Vietnam.  He first joined the US Marines in November 1943.  After training, he was assigned to ‘A’ Btry of the 11th Reg., 1st Division. Taylor was assigned to a Forward Observer team and on September 15, 1944, his unit landed at Peleliu, Palau Island, which was covered in a pall of black smoke.  After spending the night on the beach, his unit became part of the left flank as the division moved forward.  At sundown, a landing craft infantry came up to their beach position and saturated the area right in front of them with rockets.  The next morning when they moved out, the area that had been shelled was littered with bodies.  They were still being shot at, mostly with enemy mortars, and he was trying to shelter in some coral outcroppings when a mortar shell landed very close to him and peppered his right leg with coral fragments.

With the action going on, he and another FO team member were told to go find their own Battery.  They found it and were reassigned as machine gunners.  This engagement lasted about 2 weeks, resulting in significant causalities. They were replaced with the US Army 81st Division and moved back to Pavuvu in Russell Islands.  After some downtime and resupplying, his unit was involved in the Battle of Okinawa, Ryukyu Islands from April through August 1945.  Their objective was to take and hold an airfield, which they did.  After the capture of the airfield they turned south and set up position on the north side of Heartbreak Ridge.  When they moved again, they passed the totally ruined city of Naha were he recalled that “Nothing was standing.”  They were sent to northern China for the Occupation of China and he was in the Tientsin Province, from September 1945 to February 1946.

He was Honorably Discharged from the Marine Corp in March 1946. After returning home to Salina, Utah, and working for two years at the Premium Oil Company as a mechanic, he joined the US Army.  In February 1953, he was transferred to the US 8th Army in Korea as a supply NCO.  He was later transferred to a MAAG unit on Taiwan as an adviser to two military depots on different ends of the country.  He then went to Ft. Ord, CA. as a supply NCO and then to the ROTC unit at the University of Arizona in Tucson, AZ.

In 1966, he was transferred to Co. ‘B’, 15th TC BN, 1st Air Cavalry Division in Vietnam as a supply NCO.  Taylor was assigned to a supply group that provided spare parts for the helos that were used in country.  Even in the division supply area they would receive mortar on regular occasions.  One night there was a direct hit on the supply area, killing one and wounding eight others.

He rotated back to the states in 1967 and decided, along with input from his family, to retire.