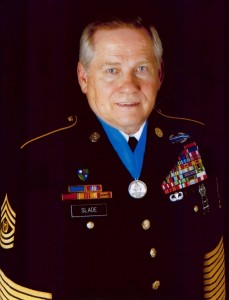 James Slade was drafted into the military from Murray, Utah in 1968 and served one year and seven months on active duty during the Vietnam War.  While in the Army, Slade completed Basic Combat Training at Fort Ord, California, infantry school at Fort Gordon, Georgia, and airborne training at Fort Benning, Georgia.  He served in II Corps (Central Highlands) in the Republic of Vietnam from March 1969 to March 1970 and was assigned to a Long-Range Reconnaissance Patrol (LRRP) team from Company N, 75th Infantry, 173 Airborne Brigade.  During his year in Vietnam he completed 42 long-range patrols, 36 of which involved firefights.  He suffered a leg wound from grenade fragments while on the last of these patrols, and received the Purple Heart.  While in Vietnam, he was promoted to sergeant (E-5).

Slade recalls one particularly sad event that occurred during his tour of duty in Vietnam.  He and his Long Range Reconnaissance Patrol team were in a jungle when they received a radio call to march quickly five kilometers to a friendly village that was about to be attacked by a Viet Cong unit.  It took a considerable amount of time to move that distance through the harsh terrain, and when they arrived at the village, they found the buildings had been destroyed and most of the people executed.

In 2006, following retirement from the National Guard as a sergeant major, Slade became the State Coordinator for Military Funerals, a position he held for four and one-half years.  Currently he is a Military Outreach Coordinator for the Employer Support of the Guard and Reserve (ESGR).