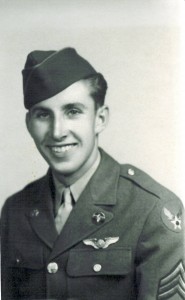 Ray Matheny was born in Los Angeles and took his first airplane ride in his uncle’s biplane in 1930. He enlisted in the U.S. Army Air Corps at the tender age of 17, and took basic training in Miami Beach, Florida. After aviation schools in Mississippi and Texas, he was assigned as a flight engineer and top turret gunner on a B-17. He was assigned to the 379th Bomb Group, 8th Air Force, Kimbolton, England.

He was soon introduced to aerial combat by flying over Nazi-occupied places in Norway, France, and Germany. He and his crew endured several terrifying missions where his aircraft was hit by flak, twenty millimeter cannon shells, and machine gun fire.  He said, “There is nothing like the camaraderie of a flight crew in combat.” His ninth mission was to Kiel, Germany, a northern German naval base. Messerschmitt fighters and anti-aircraft flak attacked their B-17. Then a German fighter armed with anti-tank rockets blew the right wing off of his B-17. The plane turned upside down, righted itself and, despite the pilot’s attempt to regain control, it went into a deadly flat spin.

Matheny found himself at the forward escape hatch with only one buckle connected to his parachute. The airplane blew up and ejected him out through the hatch.  Regaining consciousness, he opened his parachute, and estimated that he was unconscious in free-fall for about two miles before he awoke and pulled the parachute rip-cord. As the parachute slowed his rate of descent, pieces of the exploded plane partially collapsed his parachute. He landed on a frozen canal and broke through the ice into the water. It was January 5, 1944. He was 18 years old. Eight of his other nine crew members were killed in the explosion and crash.

Matheny was soon captured by kind German civilians who saw to his immediate needs. He said, “That moment I learned who the enemy was and was not.” He was taken by truck and train through several cities, where he saw two German civilians flash the “V” for victory sign to the prisoners in his group. He ended up in Stalag 17-B, a German prisoner of war camp in Austria that held nearly 30,000 POWs from various nations. Conditions were over-crowded with up to 300 men in barracks built to accommodate 150. Matheny spent his nineteenth and twentieth birthdays in the POW camp.

As the Russian army advanced, it became necessary to move the camp westward to get away from the combat zone. Matheny’s group was marched 187 miles in eighteen days. They marched by the infamous Mauthausen Concentration Camp and witnessed some of the atrocities committed there. The group was still under Germans guards in the area of Braunau, Bavaria. On May 3, 1945 American troops freed the prisoners, and they were repatriated through Camp Lucky Strike, LeHarve, France.

On his return home Mr. Matheny attended college and achieved an aircraft airframe and engine repair certification. He was called back to duty during the Korean War, serving three and one-half years in Japan investigating aircraft accidents. After leaving the U.S. Air Force, he earned a Ph.D. in Anthropology. He specialized in the archaeology of the Maya area, taught at BYU for 40 years, and authored science articles including one for National Geographic. He continues to do research,writing about archaeology and World War II.