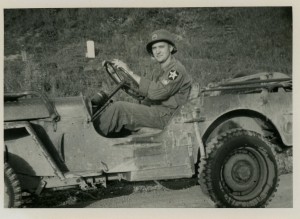 Edward Kay arrived at the front lines in Korea on June 1, 1950 as a rifleman, Private E-1. He was assigned to Headquarters Company, 2nd Battalion, 9th Infantry Regiment, U.S. 6th Army. In the next four months, Kay was promoted through the non-commissioned officer ranks to Master Sergeant and became Battalion Sergeant Major and Acting Battalion Adjutant.

Kay served in two of the bloodiest battles of the war: Bloody Ridge and Heart Break Ridge. The battle of Bloody Ridge occurred between August 18 and September 5, 1951, in the hills north of the 38th Parallel dividing North and South Korea. Kay recalls that his Battalion’s quad-fifty gun trucks (four 50-caliber heavy machine guns mounted in a turret on the back of a deuce-and-a-half truck) fired so many rounds at the enemy that the barrels melted. The battle resulted in 2,700 UN troop casualties and 15,000 communist troops casualties.

The month-long battle of Heart Break Ridge began nearby almost immediately thereafter on September 13 and lasted through October 15, 1951. American, French, and South Korean forces assaulted North Korean troops who had dug in on a ridge and fought the surrounding Chinese troops in the valley below. After 30 days of non-stop combat, Allied forces took the ridge, sustaining 3,700 dead and wounded while inflicting 29,000 casualties. Kay’s 2nd Battalion incurred 850 casualties, which was more than the unit’s assigned strength, and 27 of its officers were killed.

Kay says, “I was proud to serve in the U.S. Army, not that I wanted to at the time. I am proud that I was promoted through the non-commissioned ranks to Master Sergeant in just four months. There is something about the war that stays with you 60-plus years later. I served with some of the best guys I have ever met in my life, through some of the most brutal, ugly fighting of the war. We defeated the enemy, even though the war has never officially ended.”