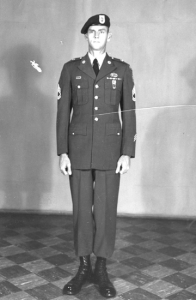 In 1959, before the U.S. was formally involved in Vietnam, he and his team were dropped into Laos with the “White Star Mobile Training teams” as part of the “Village Defense Programs” along the Ho Chi Minh Trail, under the command of Col. (Bull) Arthur D. Simon. This program was first started under the code name, “Operation Ambidextrous” then went to “Operation Hotfoot” and finally to “Operation White Star”.

WHITE STAR was a clandestine operation established in 1959 under the auspices of the CIA, and carried out through the Ambassador to Laos, to “assist” Laos in fighting the communists. The teams worked with the Laotian people, mainly the Hmongs and other ethnic groups.  Because of the classified nature of White Star at that time, he was deployed wearing civilian clothes and carrying DOD civil service ID cards which probably fooled few.  His orders stated he was TDY Okinawa.  As part of the first “A” team his TDY was extended beyond the max TDY of 180 days. Eventually replacements arrived and his group returned to Ft. Bragg, where they found out that the original 77th SFG(A) had a name change and was now the 7th SFG(A).

In 1960 Hollingsworth was transferred to the 1st Special Forces Group, HQ in Okinawa.  While assigned to the 1st SFG in Okinawa, he was involved in a number of “special” operations in South East Asia, most of which are still classified. In late 1964 he returned to the US and was assigned as a SF Adviser to the New York SF National Guard.

After his discharge from the military, he secured employment to support his family.  As he was around the public and heard the comments about the Vietnam War he became increasingly concerned about the views of Americans.  He started to speak up and out about what he felt were the real issues around the Vietnam War.  As he did so he was asked more and more to speak to church groups, schools, civic clubs and political organizations.  This became his career and he spoke to these groups all around the country for seven years.  He spoke to students at most of the large universities in the U.S. and sold thousands of copies of his book, “Behind the Scenes in Vietnam”.  When he became the corporate pilot for Christian Crusade and was added to their speaking staff, he donated the publishing rights for his book to the organization and their cause for freedom.

Hollingsworth is concerned that Americans are not as involved in maintaining the American way.  He has said that to “win the battle to keep America strong, we need to start in our homes.  We need to instill pride in our flag and our country in the hearts of young and old alike…We need to study our American way of life and then inform others and take positive action according to our own beliefs.  In this way we can keep America strong…When we get discouraged about what is happening around us remember what Hale said–‘I am only one, but I am one.  I can’t do everything, but I can do something.  What I can do, I ought to do.  What I ought to do by the grace of God I shall do!’”