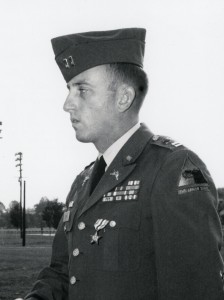 Hansen recalls Dec 9, 1968 as “The worst day of my life. We were conducting a reconnaissance mission near the Cambodian border, 60 miles north of Saigon, when we were called to help friendly forces in a fierce fire fight 25 miles away. Enroute, our troop was engaged by another enemy force with small arms, automatic weapons and rocket propelled grenade fire. It was the second time in two weeks we had been ambushed near this location.”

His Silver Star citation states: “Quickly and professionally Capt. Hansen reorganized his force and led the frontal assault against the well concealed hostile fortifications and successfully defeated them.”

After reaching the friendly group who were engaged in hand to hand combat with the opposing force, his troop again met an intense barrage of antitank grenade fire. “Capt. Hansen- exposed himself to enemy fire while making the difficult decisions coordinating precise artillery and air strikes until the hostile force withdrew. His aggressive actions and leadership turned the battle into a successful victory over the large North Vietnamese Army force.”

For Hansen it was bitter and sweet. There had been no casualties after Troop C arrived, but prior to their arrival 54 had been killed and 80 wounded.

The following day Capt. Hansen was injured by shrapnel from a rocket propelled grenade. Within 30 seconds he received aid, within 12 minutes he was airlifted to an aid station, and then afterward he was hospitalized for a month.

After Vietnam Hansen served as an Assistant Professor of Military Science at the University of Utah where he was recognized for his outstanding teaching. He loved serving in the Army and considered it almost a “calling” with great responsibilities. “Command, especially, can be terrifying but also most rewarding. Vietnam was a major experience of our lives where we were taught quickly about trust and accountability and made enduring life long bonds. All gave some, some gave all.” Of the more than 58,000 names on the Vietnam wall, 795 are from his Blackhorse 11th Armored Cavalry Regiment. For the past 10 years on Memorial Day and Veterans Day, he walks the length of that wall then continues a loop to the WW II memorial, Korean Memorial, and the Vietnam Woman’s memorial. On the 25th anniversary of the Vietnam Wall in 2007, he spoke during that ceremony as a representative of Lockheed Martin Company.

Mr. Hansen feels America’s Soldiers, Sailor, Marines, and other service men and women are the greatest national resource we have. They deserve the best equipment and leadership, and an outpouring of our appreciation in recognition of the sacrifice they are making.