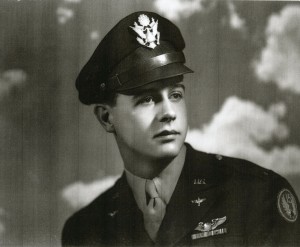 Spencer Felt always wanted to fly. After graduating from East High School and a completing a year at the U of U he jumped at the opportunity for flight trainingas an Army Aviation Cadet in 1943.

When Supreme Allied Commander, U. S. Army General Dwight D. Eisenhower directed the Invasion of Europe on D-Day June 6, 1944, Mr. Felt was nearing the completion of flight school. On the Russian front the Germans were being pushed back from Russia to the eastern border of Poland. During August, September and October of 1944, B-24 Copilot 2/Lt Felt was training with a crew of ten in Casper, Wyoming. At that point in the war almost all B-24s were going to the Pacific theater. Felt and his crew joked about the fact that it was too bad they won’t be going to Europe because if they were shot down they could use their Navigator Tad Dejewski’s knowledge of the Polish language to get them out. Tad’s parents had emigrated from Poland. He could speak and read that language fluently. Little did they know, Dejewski’s language ability would become necessary. In November Felt’s crew was assigned to the 757th squadron of the 459th Bomb Group in Italy.

At 4:30 A.M. on Monday, Dec 18th Mr. Felt and his crew were awakened for their 2nd bombing mission. At the briefing after breakfast, when they were told their mission was a petrochemical plant in southern Poland, everyone let out a low whistle because that was an eight hour flight, as long a mission as could be made. It took four hours to get to the initial point for the bomb run. From there to the target it was straight and level at 24,000 feet and it was cold. Bursts of black smoke from flak burst all around them. Everyone was tense and there was silence on the intercom. Then when one burst came very close, Felt said to his pilot, “Bill, do you realize they are shooting at Mrs. Felt’s little boy?” The oil pressure dropped on the #3 engine. Felt shut it down and feathered it. Unable to keep up with the formation, they disarmed their bombs, dropped them, and turned back toward Italy as the #4 engine quit. With both engines on the right wing out, the only choice was to turn east toward Russia. Ten minutes later the #2 engine overheated and lost power. The order came from his pilot Bill to “Bail Out.” Bill and Spence held the controls while the rest of the crew bailed out. Spence waited at the bomb bay while Bill set the auto pilot. Spence tumbled out head first – about 10 miles behind the rest of the crew. He hit the ground up hill so hard that it knocked him unconscious.

All the crew survived, except for Bill, whose chute didn’t open. They began evading through 18 inches of snow. Due to remarkable and hard to explain coincidences they were found and united within two days by members of the Polish underground who directed them to safe places in the mountains for five weeks. Tad’s language ability saved them from German patrols and then from drunken Russians when the eastern front passed them. Felt and crew, under Russian escort, were trucked to the Polish border town of Lvov where they boarded a train to Kiev and then to Odessa near the Black Sea. On that train in February Spence celebrated his 21st birthday. By ship they joined many liberated American prisoners of war and crossed the Black Sea and Mediterranean to Egypt and then continued on to Naples, Italy. A few days later Mr. Felt boarded a ship for the United States, docking in Boston April 9, 1945.

Of his shoot down and three month odyssey Spence said, “It didn’t turn out so bad. I had more courage. After those experiences, I felt I could handle anything.” He has made five trips back to Poland.