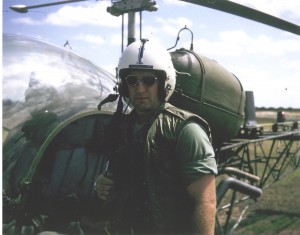 Stephen Featherstone enlisted in the U.S. Army in 1955 at the age of 25. He graduated from Infantry Officer Candidate School at Fort Benning in 1956 and became a helicopter pilot at Fort Rucker. After Officer Candidate School, he became an Army Ranger and Airborne Jumpmaster.  Featherstone served overseas in Korea and Germany until he was sent to Vietnam in 1965 with the 1st Infantry Division.

Featherstone served two tours of duty in Vietnam, one at the beginning of the war from 1965-1966 and another from 1971-1972 near the end of U.S. involvement.  In his first deployment, Featherstone flew missions along the DMZ and then became the pilot of the Division Commanding General’s personal command-and-control Huey.

In his second tour, Featherstone was a Lieutenant Colonel serving as commander of the 158th Combat Assault Battalion in the 101st Airborne Division. He led helicopter assaults in the A Shau Valley to interdict infiltration of NVA troops and materiel from the Ho Chi Minh Trail. He led missions to protect and resupply the encircled Marine Base at KheSanh. He led nighttime sorties to rescue Army and Marine units from jungle and mountaintop positions that were about to be overrun by the enemy. Although his helicopter was often hit by ground fire, including rounds that went through the plexiglass windscreen of his cockpit missing him by inches, Featherstone is amazed he was never seriously wounded. Featherstone earned numerous medals and commendations for his acts of valor.

In 1976, after serving his country for more than twenty years, LTC Featherstone retired from the U.S. Army.

“I proudly wear a hat that says, ‘Vietnam Veteran.’ It was an honor to serve and I’m grateful to be able to present another side of the story of Vietnam. I hope people will learn that our men who served there should be honored. They were as good soldiers as the Army has ever had.”