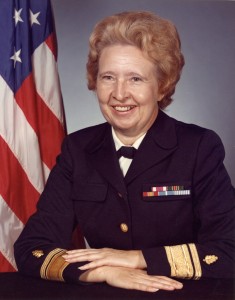 Maxine Conder served 28 years in the Navy Nurse Corps, retiring as a Rear Admiral.She joined the Navy Nurse Corps as an Ensign in 1951.  She was in ninth grade when President Roosevelt declared war on Japan, and was greatly affected by having some of her classmates leaving for war even before their high school graduation.  Conder trained as a nurse from 1944-1947 and her experiences in high school provided her with a sense of obligation to serve in the military when the Korean War started.

At the end of 1953, after spending two years at a stateside naval hospital, Conder was sent to the USS Haven, a naval hospital ship.  The USS Haven was moored off Incheon and was receiving a variety of patients by helicopter, including South Korean, United Nations, and United States patients.  Conder recalled that, being born and raised in Utah, she experienced some culture shock when treating such a wide variety of patients.

While on the USS Haven, Conder treated a number of different ailments, from combat wounds to heart attacks.  Many of her patients had frostbite, immersion foot, and tuberculosis.  Other times she treated mass casualties, with some of the patients so covered in wounds that she would be working on only one part of the body, while other medical personnel handled the other wounds.  Conder recalled that some of the wounded “were so young, it’d break your heart.”  She was also impressed by the servicemembers’ sense of brotherhood and their selflessness towards one another, recalling that they would come onto the ship and plead with her, “Ma’am, would you take care of my buddy first – he needs you more than I do.”

After the hospital ship, Conder was sent to Guam, where she lived and worked in Quonset huts.  She recalls pounding the walls before entering patient rooms to scare off the rats.  The conditions were quite primitive and many of the beaches were closed due to remaining live ammunition.  On Guam, she was trained to care for polio patients, which turned out to be fortuitous as, after she returned stateside to her duty station in Chelsea, Massachusetts, she was put in charge of patients in the last big polio epidemic in the United States.

In 1975,Conder was promoted to Admiral, and was only the second woman promoted to that position.  She was in charge of the Navy Nurse Corps, which consisted of 2600 Navy nurses worldwide.  While director of the Navy Nurse Corps, she was invited, along with the heads of the other branches’ nursing corps, to China.  This delegation was the first group of military servicemembers to visit mainland China since 1949, except for those who traveled with President Nixon.

Looking back on her time of service, Conder notes that she witnessed dramatic changes in the way women in the military were treated.  She recalls the days when women could not be married and remain on active duty, and the days when male spouses were not considered to be dependents.   Conder declares, “I am so grateful that I had the privilege of serving my country during those years when there were such changes coming about.  I loved every second I was on active duty and I felt I was doing something worthwhile.”