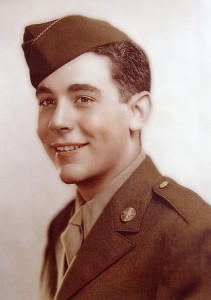 Forrest Allinder was in his freshman year at the California Institute of Technology studying chemistry when he enlisted in the U.S. Army.   After his basic training in Fresno, California he was promptly sent to school at the University of Michigan to continue his studies in engineering.Four months after D-Day in 1944, Allinder was sent to Fort McCoy for final combat and conditioning, and then shipped to Europe via England and Le Havre, France. He and his division were assigned to Patton’s Third Army, the 76th division, the 417th Regiment.

On February 7, 1945, Allinder’s battalion was given the task of breaching the Siegfried Line at Echternach, by crossing the rain and snow- swollen Sauer River. The 417th was among the most forward elements of the attack.

At 7 A.M., Allinder’s battalion set out in small boats to cross the river; however, due to the river being at flood-stage, the overloaded boats capsized and quickly sank. The soldiers were dumped into the freezing water, while under intense artillery and small arms fire from fortified German positions. It soon became apparent that many of the soldiers either couldn’t swim or were wounded and could not get to shore. Allinder worked hard to save the lives of these men by pulling them out of the water.

After he could not see any more U.S. soldiers in the water, he turned his attention to making a bridgehead on the far side of the river. The Germans continued to fire onthe 417th in an attempt to stop the U. S. attack. The fighting was intense as Allinder’s Company D made their way to a ravine and up out of the heights lining the river banks. His regiment covered about one thousand yards, the furthest of any group that day, but costing the regiment a sixty-two percent casualty rate. Allinder said, it was “…so brutal, so dirty, there is no way to communicate it.”

After some rest and replacement, the regiment continued on East. At Mertzdorf, the Germans counter-attacked in a last ditch attempt to halt the U.S. invasion. Allinder’s platoon fired mortars so quickly that the barrels heated up and warped. Weeks later,  Allinder found himself at a bridge, at the German-Czechoslovakia border looking at a group of soldiers who definitely weren’t American, nor were they German. They soon realized they were Russian soldiers. There was a happy meeting where the only common language was what little German each side had picked up.

When asked how he felt on the day the Germans surrendered, he simply said, “One down, one to go.” As the division and regiment prepared to go to the Pacific, the atomic bombs made that unnecessary. Forrest was deeply grateful they would not have to invade Japan. Allinder eventually returned home and completed a master’s degree in chemical engineering, spending most of his career in the petrochemical business.