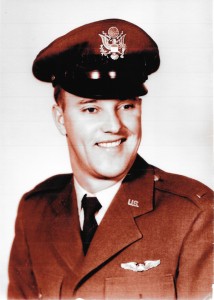 When Major Richard Carter was 11 years old, his father passed away. He and his two sisters, were left to run the family farm near Santaquin, Utah.  When he graduated from Payson High School in 1949, he had made it through the Great Depression and watched World War II begin and end.  After working for a year, he enrolled at the University of Utah and signed up for Air Force ROTC.  After graduation, he completed flight school and opted for bomber training because the wait for fighter school was too long.

A posting in the Philippines followed and soon after, the brand new B57s arrived.  Carter noted, “I had two weeks to acquaint myself with dive bombing, skip bombing, flying rockets, firing guns and how to roll in on a target on the water during the blackest nights you ever saw.”  After two weeks in the new aircraft, he left the Philippines and was off to Vietnam.

On July 20, 1967, Carter was piloting his Canberra over North Vietnam and having no luck finding a target. He made three passes along the assigned road, but saw nothing.  Determined to carry out his bombing mission, he dived through cloud cover and saw multiple trucks on a winding road.  He quickly shot back up to 8,000 feet and “set up for some serious bombing.” After three more passes, he decided it was time get out of there.  The flak sounded like popcorn popping all around him, and the plane took at least one hit by an explosive shell behind the canopy.

Carter headed to an airbase just across the border to refuel, patch up the large 3×4-foot hole behind the canopy, make other repairs, and head back to base.  Later, aerial photos confirmed the destruction of eleven trucks and their entire fueling base.

For this mission, Carter earned the Silver Star.  During his 283 combat missions over the 306 days he spent in Southeast Asia, Carter was also awarded the Distinguished Flying Cross, Meritorious Service Medal, and Air Medal with eighteen Oak Leaf clusters.

Says Carter, “We could have ended that war a lot earlier if we hadn’t had our hands tied behind us.”