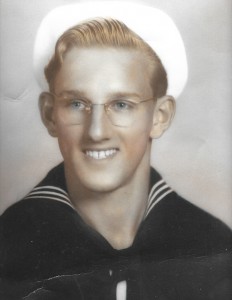 Motor Machinist’s Mate First Class Cornelius DeJong, Jr. joined the Navy on September 13, 1943 in Salt Lake City.  After training, he was assigned to the USS Barrow (APA-61), an attack transport that was the flagship for the 5th Amphibious Group under RADM Jerauld Wright.

At sea, he worked as an engine room mechanic with a reputation for innovation.  He converted a fuel bunker into a freshwater tank providing “the best showers in the Pacific” for his shipmates, he modified a jeep to do 70 mph, but it was confiscated by the base commander because it was outrunning the MPs.  During invasions, he was the mechanic on a landing craft, which had a crew of two who stood at opposite sides of the stern of the boat, with little armor protection.

During the Iwo Jima invasion, DeJong made five round trips to the beach to land 50 Marines and Seabees per mission and to evacuate the wounded.  The beach was so crowded with damaged landing craft that he and his shipmates had to circle offshore until derelict vessels could be towed off the beach and scuttled.  On his second trip to the beach, he said “On the way in, the ocean was blue, on the way back it was red.”  In the evenings, the USS Barrow and other ships would head farther out to conduct 40-50 burials at sea and then returned in the mornings to continue the assault.  This was the only way to maintain space aboard ships for the many wounded.

After Iwo Jima, DeJong participated in the invasion of Okinawa, where the USS Barrow was part of diversionary landings.  The land crafts made runs at the beach, stopping short of landing and returning to sea.  This caused the Japanese to move troops away from the real landing site, contributing to landings being unopposed.

The steadfastness and sacrifice of sailors like DeJong and his shipmates are one of the main reasons the United States was victorious in the Pacific.  After the war, DeJong and the crew of the USS Barrow participated in the rebuilding of the Marshall Islands and nuclear testing at Bikini Atoll.  The USS Barrow was one of the test ships sunk in the first nuclear blast at Bikini.

Back home in Salt Lake City, DeJong was drove race cars, built his own cars, and still works in his garage machine shop today at 91 years old.