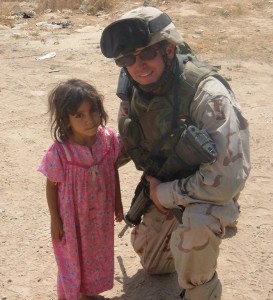 Sergeant Josh Hansen was born and raised in Bountiful, Utah. He attended Davis County schools and the Salt Lake Community College.  When the terror attacks of 9/11 occurred, he felt that he needed to serve his country, despite being thirty years old, married, a father, and a business owner.  He signed up for the Army Reserves, completed basic training and advanced training at Ft. Leonard Wood, MO, and became a Combat Engineer.

In 2004, he volunteered to be deployed to Iraq with the 659th Engineer Battalion out of Spokane, WA.  He provided security to an asphalt-paving crew, learning to dodge mortar rounds at the base near Balad. After returning home, he said, “I could not stop thinking about those who were still in Iraq doing the fighting. I felt I needed to be there to help.”

Within six months, he volunteered to go back with the 321st Engineer Battalion out of Boise, ID.  He was sent to Fallujah to be a Pathfinder and IED hunter for 5th Marines, clearing roads of IEDs.  Hansen became very good at finding IEDs and was usually in the point vehicle, an MRAP equipped with a deep V-shaped hull.  Over seven months, his vehicle took eight direct hits from IEDs.  Each time, the vehicle became airborne and knocked the soldiers around inside the vehicle, causing head trauma.

On March 15, 2007, Hansen was called out to clear a particularly dangerous road.  That day, his vehicle was struck by an IED, and while maneuvering out of the kill zone, it was struck by a second one, leaving him unconscious.  When he regained consciousness, he disregarded his own injuries in order to tend to others.  For this and previous actions, he was awarded the Bronze Star and Purple Heart.  Hansen’s injuries required his evacuation from the Iraq theater, and after months of treatment to regain speech and motor functions and alleviate pain, he returned home a disable veteran.

When Hansen lost four of his teammates to suicide, he realized he was not the only one suffering.  He co-founded Continue Mission, a non-profit organization dedicated to assisting veterans in healing and healthy living.  He says, “Every veteran is important, and they need to know that the mission continues into living a full life.”   Josh lives in Woods Cross with his wife Melissa and three children.