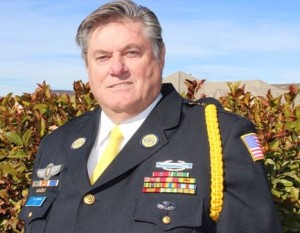 Second Lieutenant “Ski” Ingram began his life of public service when he was drafted into the Army in September, 1969.  He completed Advanced Individual Training, infantry training, jump school, and then began training for his ultimate goal – becoming a Green Beret.

Ingram had successfully completed his training through Phase I of Special Forces selection, when the Army deployed to Vietnam.  He was assigned to the Ranger Company attached to the 173rd Airborne Brigade.  He operated in five to six man teams for four to twenty days at a time, conducting ambushes, POW snatches, reconnaissance missions, and search and destroy missions.  Following these demanding and arduous patrols, he would reject the relief of sleep and sustenance and instead, opt to clean his weapon and prepare his kit for the next mission into the jungle.

Upon returning from Vietnam, the Bronze Star recipient became a drill instructor, preparing paratroopers for the war.  However, the war ended before any could be deployed, and Ingram was reassigned to teach infantry tactics to West Point cadets.  Following that, he was stationed in Europe with a TOW Missile Unit and trained with the armies of other NATO countries, particularly in the areas of explosive ordnance demolitions and live fire artillery.  His experience enabled him to design the first TOW Live Fire Missile Range and Training Course.

In August, 1977, his second enlistment was ending, and for the dedicated Airborne Soldier, there were no opportunities to return to jump status, so he continued his service by joining the Nevada National Guard, in which he was able to attend Officer Candidate School and receive the Distinguished Honor Graduate and Class Leadership awards.

Ingram moved from Nevada to Long Beach, CA and served in the Army Reserves as the Executive Officer for a Green Beret unit, the 12th Special Forces Group, until September, 1982.  He became a police officer and volunteered his time with the local Boy Scouts for which he earned the Silver Beaver award.

Upon retiring from law enforcement, he moved to Saint George, where he continues to a life of service, this time for fellow veterans.  He serves as a member of the Ritual Team of American Legion Post 90, The Veterans of Foreign Wars, Vietnam Veterans of America, and Disabled American Veterans.