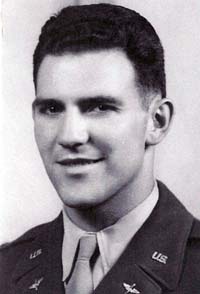 Bob Teran enlisted in the Army at age 20. He completed radio mechanic school and was invited to take pilot tests. He qualified for both bombardier and pilot.

He went to Florida for flight training and was assigned as a B-17 copilot, sent to England, and began missions over Germany July 9, 1944. Pilots could go home after 35 missions.

Many of Teran’s raids were to bomb petroleum and oil targets. On his 20th mission, his group flew into heavy flak. At 27,000 feet the “Ronny Boy” was hit in the wing. Teran ordered the enlisted men to parachute out, then he and his pilot followed. Teran always thought all his men made it out, but at a recent POW convention he learned three had died in the explosion and were buried in the Netherlands.

He landed in a field, was caught by German soldiers, and taken to Stalag III, a POW camp for officers. During interrogation he was kicked in the back by a German soldier, permanently injuring his coccyx. Teran and other POWs then had to walk 60 km to French boxcars that would transport them to Stalag VII A. Many were suffering from frostbite, hypothermia, dysentery, and diarrhea. Teran had kidney problems from the water-based food. The conditions worsened when they were loaded on the rail cars. There was no way to dispose of human waste, and no food or water.

Teran wasn’t allowed to receive or send mail because he did not cooperate with the interrogation. (Soldiers who gave the Germans personal information about themselves were permitted to receive mail, which in turn gave Germans vital intelligence.) Their food was black moldy bread made partly from sawdust, which caused many tragic illnesses. They didn’t know when they might be rescued. “Out of the gate in ’48” they’d say to each other in passing.