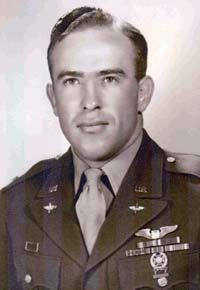 After the attack on Pearl Harbor, Charles Thompsen enlisted in the Army Air Corps. He completed flight school in April 1943 and joined his crew for combat training as co-pilot on a B-17. He joined the 100th Bomb Group of the 349th Squadron. His bomber was named “Wac Hunter.”

On August 17, 1943 Thompsen took off on his first and only mission, bombing a ball bearing factory and an aircraft assembly plant. His plane was at the back of the formation and, after crossing the Dutch border, they started receiving flak. They were under attack for nearly two hours – low on ammunition, top turret hit, interphone out, and #1 engine in flames. It was time to abandon ship. At 18,000 ft, Thompsen jumped. Nine of 10 men made it out of the plane. The tail gunner had been killed earlier.

Thompsen saw “Wac Hunter” explode. He finally opened his chute at about 400 feet, and the late deployment caused him to break his leg upon landing. Farmers surrounded him until German troop showed up to take him away.

Thompsen spent 21 months in hospitals and different POW camps. His leg was re-broken and set twice by German doctors before it was set properly by a British doctor in a third effort. In January 1945, the advancing Russians forced the Germans to relocate the POWs. They were marched nearly 100 kilometers and then put on trains to Stalag Luft VII, arriving in February 1945. In April they were liberated by elements of General George Patton’s Third Army. Patton himself rode into camp to greet them.

After the war Thompsen continued in the Air Force, retiring in 1962. He has revisited the prison camps and joined former POWs at the 50th anniversary of the liberation of Moosburg. Several years ago, Thompsen was visited by a young Briton who had found part of “Wac Hunter’s” wing wedged in a treetop blown down over fifty years later.