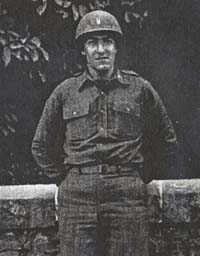 Frank Arnold was born and raised in Ogden, Utah. He enlisted under-age in 1937 as a private with the 40th Infantry Division. In March 1941 while a student at Weber College, he volunteered for a year’s active duty – but he wasn’t to be released until 1946.

In November 1942 he became a second lieutenant and, over the next two years, was assigned to the Medical Administration Corps and a horse cavalry division. He ultimately went to war with the 94th Infantry Division. During this time, Arnold returned to Utah to marry his sweetheart, Lola Holmes.

In 1944, the 94th became part of General Patton’s Third Army. In the ensuing seventeen months, the unit saw action in France, Germany, Belgium, Luxemburg, Holland, and Czechoslovakia. In December, Arnold was on the front lines during the push through France into Germany.

He became a litter-bearer platoon leader. Litter bearer platoons were the second line of first aid. When a soldier was wounded, company medics would give first aid and move on. Litter bearers would then find the wounded, help stabilize them, and take them to the nearest aid station.

Arnold was responsible for 48 men working in four-man squads. Sometimes the litter bearers were only a few miles behind the action; at other times they were crawling at the front lines retrieving the fallen. Arnold recalls a night advance in which his squad recovered 27 wounded men, including some who had lain in minefields.

After 17 months and a few near misses, Arnold walked away with all but one of his men, the victim of a German sniper. He earned a Bronze Star and was discharged in 1946. He remained in the Reserves and National Guard until 1969 serving as executive officer of the 144th Evacuation Hospital. He was also a graduate of the Army Command and Staff College.

Arnold retired in 1982 as a colonel with over 45 years of service, 30 of which was on active duty. His awards include the Combat Medical Badge, Army Commendation Medal, and the Utah National Guard Medal of Merit.