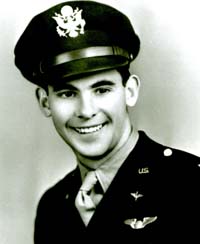 Oral B. Birch is a native of Brigham City, Utah, but completed most of his schooling in Sandy. He was a high school senior when the Japanese attacked Pearl Harbor. After graduating in 1942 he enrolled in an officer cadet program. In June 1944 he graduated as a second lieutenant in the Army Air Corps and completed navigation training for B-17 bombers.

Birch flew his first mission, a relatively easy one, on September 3, 1944 to a target in Germany. On his second mission five days later, he quickly realized the dangers involved. A faulty engine caused his plane to lag behind the squadron and it was damaged by anti-aircraft fire. They rapidly lost altitude after three engines failed, but pulled out at 1,000 feet escaping disaster, and landed in France. They lost the tail gunner, a solemn awakening for everyone and Birch’s first experience losing a comrade.

On November 21, 1944, Birch and his pilot were awakened at 3 a.m. to fly an unscheduled mission with Birch’s bomber leading the way. After emerging from a layer of clouds the squadron found itself alone in the sky with no other planes in sight. Had they missed a radio message? Soon German Focke-Wulfe 190 fighters attacked them. Of the twelve bombers in the squadron, seven were shot down, including Birch’s plane. He and other crewmembers bailed out, but the pilot and tail gunner didn’t make it.

Although Birch was captured, he was reunited with his bombardier and navigator. He was to endure 27 days in solitary confinement. On December 23, 1944 he was taken to Stalag Luft #1 in Barth, Germany where there were 28 prisoners to a cell and little food. The bread ration was partly sawdust. It had to be burned to deplete the sawdust and avoid major stomach problems.

After six months of captivity, Birch was finally liberated. On May 12, 1945 planes arrived to take the Americans home.