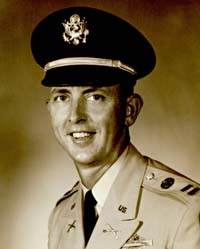 After Donald L. Hoskin enlisted in the Army in November 1943, he would serve in World War II, Korea and Vietnam. He is among 250 recipients of the coveted infantryman’s Combat Infantry Badge for combat in three wars.

In World War II, he was a gunner on an 81mm mortar during combat and he served several months after hostilities ended in the Army of Occupation as a 1st Sergeant.

In 1946, he volunteered to serve as a military escort of World War II dead and escorted their remains to their families.

He says that his first tour in Vietnam was by far his most proud time of service. He was in the U.S. Army Special Forces – a Green Beret and commander of an “A” Team whose mission was counter insurgency. He was never wounded in three wars, but sustained a fractured pelvis in a parachuting accident at Fort Benning, Georgia and a severely broken leg while on a combat patrol in Vietnam.

Now a retired Colonel, Hoskin never passes an American flag without saluting it to honor the colors and fallen veterans. From his years of service, he learned this important lesson: Freedom is not free. Someone pays a price for it.