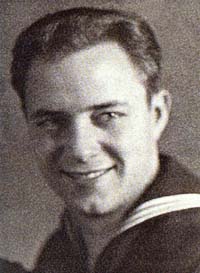 Briant Jacobs was born on October 19, 1917 and grew up in Clearfield, Utah. He joined the Navy on February 1942 in response to the Japanese attack on Pearl Harbor. After training as a diesel mechanic, he was assigned to LST 455, renamed the USS Achilles, and steamed toward combat in the South Pacific. His ship had been specially rigged to repair small landing craft while in battle.

On February 9, 1943 at Marobe Harbor, New Guinea, LST 455 was attacked by Japanese fighter-bombers. The LST shot down two planes before taking a direct hit from a bomb that penetrated the steel-plated deck, killing 16 men and wounding 11. Jacobs was blown off his feet.

After the attack, Jacobs was upgraded to yeoman and assigned as a typist, one of the few on the ship with this skill. After repairs, the Achilles was assigned to the huge invasion fleet escorting General Douglas MacArthur to the Philippines to fulfill his famous “I shall return” promise. “As far as the eye could see there were U.S. ships of every nature, including the lowly LSTs, and in the air was an umbrella of aircraft,” Jacobs recalls. “It was amazing to behold. I remember the date, 20 October 1944, because my birthday was the day before. As we steamed into Leyte Gulf we were awakened by a General Quarters alarm. Running to my position, I saw the sky covered with dogfighting planes, and bombs were dropping all around us. A tugboat on our starboard side took a direct hit. I watched it sink with all aboard.”

The attacks lasted about one week and then things quieted down for about a month. Just after receiving orders to leave Leyte Gulf, a Japanese kamikaze “dove out of a cloud and hit us amidships. Its bomb penetrated our deck and the plane’s engine dropped to our tank deck, killing 30 men,” says Jacobs.

Two week later, they left Leyte. Jacobs returned to the USA for two months of furlough. “I made it home to Utah,” he say, “my beloved home state.”