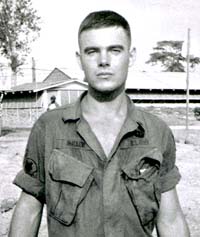 Nicholas Miller was born on September 7, 1946 and spent much of his youth moving back and forth between Salt Lake City and the East coast. In the mid-1960s he was certain he would be drafted so he decided to join the Army to fill his need for adventure and challenge. In November 1966 he joined the 101st Airborne Division as a medic. Before he left for Vietnam, Miller had the feeling he would survive the war but never anticipated what he was getting himself into.

Before he arrived in Vietnam, Miller had only heard about what was happening and didn’t know what to expect. Once he arrived, he was quickly confronted with wartime violence. He felt fortunate to have trained with the soldiers that he would later fight alongside on the battlefield. But when a friend was killed in action, the emotional trauma was great and caused extra stress on survivors of the battle. Miller and his buddies had to find ways to numb their feelings about the awful things they witnessed.

Miller risked his own safety and life to help the wounded and protect his company from enemy attack. During one battle with intense enemy rocket fire he rushed to the aid of his wounded comrades administering medical aid and even covered their bodies with his own to protect them from further injuries. During other battles he aided wounded soldiers while dodging enemy fire, and was credited with enabling the lightly wounded to continue fighting so they were able to repel the hostile assaults. He received fragmentation wounds from a near direct hit from an enemy rocket propelled grenade – but even his wounds did not deter him from his mission to provide medical aid to his comrades.

Miller says the reason he accepted this year’s Veterans’ Day honor was on behalf of the men and women who didn’t make it home to their families, who sacrificed their lives for the freedom of others. It is a gesture indicative of a man who has dedicated a great part of his life to the service of others.