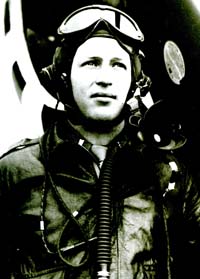 Lonnie Moseley served in three wars and two different services. He first became an Army Air Corps cadet when he was at Dixie College in St. George, Utah. He was trained as a pilot and assigned to a Republic P-47 Thunderbolt fighter.

After going to Europe with the 84th and 78th Fighter Groups, Moseley’s P-47 was hit by antiaircraft fire over France and he parachuted onto a French farm. He lived with the family for three months, and, with their help, pretended to be deaf and mute. When he was able to walk into the British lines, he was reunited with his unit in England–still dressed as a French farmer. (He still has the coat made by the French farmer’s wife.)

At the war’s end, he left the service as an officer but later joined the Army as an enlisted man. When the Korean War broke out, Moseley was commissioned a second time and assigned to the 10th Corps Aviation. He first flew two-seater Piper Cubs for directing artillery fire and observation, then medical evacuation flights into isolated and often surrounded battle sites. He flew alone; the other seat was for the wounded.

Comparing his experience to World War II, Moseley says Korea was far worse. “Chinese were firing at you on approach and even on the ground you were ducking fire. When you took off, those little putt-putts would be doing 65-70 mph and guys are shooting at you.”

For Moseley, evacuating troops from the Chosin Reservoir was “the greatest service I’ve done in the military. The guys were up there wounded and freezing, and as long as I could get in, I kept going. If you can rescue a person who might die, that’s not going beyond duty, that is duty.” Moseley left Korea in 1951.

He attended helicopter school and earned a rotary-wing rating. After serving in Nevada and Germany, and two tours in Ethiopia, he went to Vietnam as a staff officer.

Moseley had the singular distinction of being sworn in to the service as an enlisted man at Fort Douglas and, 32 years later, retiring as the acting commander of the same base, Fort Douglas.