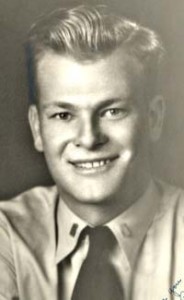 Elwin Petersen was born on April 17, 1920 in Logan, Utah. During his second year at Utah State Agricultural College, a naval recruiting poster caught his eye. He was sworn in as an aviation cadet on December 4, 1941, three days before the bombing of Pearl Harbor.

Petersen went to Corpus Christi, Texas to train on the multi-engine PBY Catalina flying boat – and met Nona Garret. After assignments in Washington and Alaska, he got 10 days leave and returned to Texas to marry Nona on February 11, 1943.

He was checked out to become a patrol plane commander and he and his crew trained in strafing and skip-bombing missions. The next assignment to Tinian Island proved heroic for Petersen and his crew. The following account is taken from a Navy Action Report:

Petersen dove the Blue Raider through two strafing runs against the Japanese vessel, boring in against moderate but inaccurate gunfire. An explosion rocked the ship and Petersen had to dodge around flying debris. The Japanese target appeared dead in the water, and settling. Two more strafing runs would finish it off. On the final pass, a shell exploded in the Blue Raider’s cockpit and killed the copilot. Shell fragments sliced into Petersen’s cheek and blinded his right eye. He lost consciousness, but quickly recovered just in time to avoid crashing.

The Action Report states: “With amazing lucidity and self-control, with his crew and plane so near disaster, Lt. Petersen took command of the situation and brought the plane safely to the base…an epic flight, unsurpassed in the history of Navy PB4Y squadrons for guts, steady courage, heroism, and devotion to the duty.”

Petersen retired as a lieutenant commander in 1946. When asked if he would do it again, he replied: “Oh, hell yes, in a second. We were fighting for freedom.”