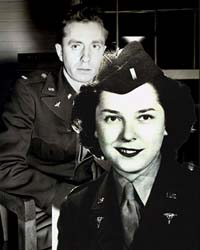 Ed Rawley was born February 14, 1917 and spent most of his youth in the New York area. He joined the military in response to the attack on Pearl Harbor and received pilot and navigation training. In a Sea Search Attack Squadron, Rawley got the task of detecting German U-boats that were a constant threat to allied shipping. Early in the war, submarine “wolfpacks” sank dozens of freighters every month. The aircraft of Rawley’s outfit, armed only with small guns, a light bomb load, and crude radar, scanned thousands of miles of ocean hoping to spot an enemy periscope.

In 1944, while assigned to the 399th Bomb Group at March Field, California, he volunteered on a test flight of a recently repaired B-24 bomber. The four-engine plane crashed and Rawley was pinned under a gun turret as ruptured wing tanks touched off an inferno.

“I tried to inhale deep breaths of smoke, hoping it would render me unconscious and free me from the agonizing pain,” he recalls. Then he recited a verse he’d memorized as a child, “Yea, though I walk through the valley of the shadow of death, I will fear no evil.” At that moment the turret shifted and he was able to free his legs. His hands were too badly burned to be of help, but he was able to work his way clear.

Five months later, both arms and legs were in casts. “I didn’t think I had much of a future,” Rawley says. During his 14-month recovery at Bushnell Army Hospital in Brigham City, Utah, both hands had to be amputated. “At the time,” he says, “I believed I’d rather be dead.” Rawley was fitted with prosthetic hooks. He became so proficient with them he was assigned to be a liaison to other amputees. He worked with thousands of patients over 13 months and found a new dimension to life. He continues to volunteer at the University Hospital Burn Center.

Virginia Kay was born April 29, 1922. Growing up in Heber City, she attended Brigham Young University and then completed nurses training at LDS Hospital. The 12-hour work days were hard for her, but it prepared her for her service as a nurse in the military.

When she heard of the Cadet Nurse Program that the military had instituted to provide more assistance to the numerous wounded, she signed on. Her military career carried her to a number of different areas, Fort Lewis, Washington, to Torney General Army Hospital in Palms Springs and, eventually, to Bushnell General Army Hospital in Brigham City, Utah. Working throughout WWII with both the nightmarish physical and psychological scars of the battle-wounded, she eventually met Ed Rawley, who was still recovering from his horrible burns.

It was she who gave him the hope and willpower to continue in his life despite what could be viewed as a permanently debilitating loss.

As her son would later write, “My mother served her county with honor and distinction. She also served quietly without much fanfare. She performed her job as a registered nurse caring for and comforting injured and sick soldiers. Like most of her fellow nurse/soldiers she received a few official commendations and medals but she was never given much, if any, public recognition as a heroine who served her country honorably in times of war. If you were to ask the soldiers she cared for and nurtured in the darkest hours if she was a hero, I am sure you would receive a unanimous resounding chorus in the affirmative.”

The biggest thing she says she learned from the experience was to adapt to different situations and to do well despite the adversity.

Virginia Kay, a 22-year-old cadet nurse, met Ed Rawley during his recovery. He remembers her as an angel of mercy who helped him regain his independence. “Her inspiration gave me an attitude of self-sufficiency so I could accomplish what I thought was impossible,” says Rawley. Once he was released from the hospital, he made it a point to be assigned to wherever Kay was. Eventually she got the hint. “When Ed makes up his mind to do something, he does it,” says Virginia. “Almost nothing intimidates him.” They were married June 26, 1946.