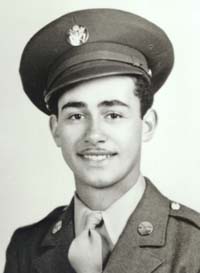 Bibian Rendon was born on April 13, 1923 and spent most of his youth in Salida, Colorado. He took basic training at Camp Roberts, California, and was sent to New Guinea, a 30-day trip due to skirmishes with a submarine and enemy aircraft. Once, a Japanese plane dove toward Rendon’s ship and dropped a torpedo. It hit the water and bounced over the top of the ship.

Rendon was assigned to the 32nd Infantry Division in General Krueger’s Sixth Army. He was immediately sent to the front lines for horrific jungle combat with the Japanese. His unit lost many soldiers to malaria, jungle rot, ringworm, huge spiders, jungle ants, and snakes. Sleep in the jungle did not come easily. Even if they were not under fire, U.S. troops had to worry about losing their heads – literally. At night, Japanese soldiers would sneak up on the American soldiers and attempt to decapitate them with swords.

Rednon was next sent into battle in the Philippines, first at Lingayen Gulf, Leyte, then on Luzon with the 25th Infantry and the 41st Infantry Divisions. They encountered a fanatical enemy who threw everything at them, including point-blank artillery fire.

Rendon was promoted to technical sergeant and put in charge of the regimental reporting section for missing and killed. When money was recovered from the dead who had been lying in the sun, it was often considered useless because it had the stench of decaying bodies. But Rendon didn’t throw it away, which he’d been told to do. He washed it in a river and sent it to families of the deceased.

Rendon was among the first American soldiers to see the devastation in Hiroshima and Nagasaki after the atomic bomb was dropped. He was awarded the Purple Heart as he lost most of his hearing and partial function of an arm.

When he returned home, he was confined to bed with malaria and nearly died. Rendon says even though the war was a terrible waste of time, money, and lives, he fought because it was his duty to other soldiers and to his country.