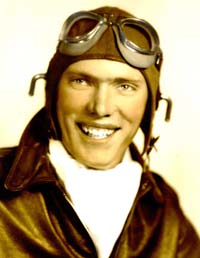 Reece Robertson enlisted under-age in the Wyoming National Guard, a horse cavalry unit, in 1936. Pay was a dollar a day but relief from farm life was worth it. On February 24, 1941 his unit was mobilized as part of the national defense buildup. News of the Pearl Harbor attack came while he was on a firing range. Robertson took the Army Air Force Cadet exam and, in 1943, finished training in medium bombers.

He was assigned to fly a two-engine A-20 Havoc from England. When France was liberated, his unit of the 9th Tactical Air Force was moved to French airbases for quicker ground support response. His unit was the first to receive the new A-26 and he had the distinction of being in the first one shot down. In December 1944 during Robertson’s 39th mission, his aircraft was hit. One engine was aflame and there was a fire in the bomb bay. The gunner bailed out and flames singed Robertson’s hair before he jumped. He was captured by the Germans.

During interrogation, he said he was a medium bomber pilot so the Germans would assume he flew a B-26, not the new A-26. When accused of being a spy, he asked, “Do you really believe a spy would enter Germany by bailing out of a burning plane in the middle of the day?”

As a POW, Robertson was sent to Stalagluft 1 where nearly 10,000 other allied airmen were being held. Each room was about 15 by 15 feet with three-tier bunks along the walls. For warmth, each person was given two burlap blankets. The daily menu was one can of soup, a seventh of a loaf of bread, and the contents of a Red Cross package.

One morning, the prisoners awoke to find their guards had left. The Russians, upon arrival, suspected the prisoners of being Nazi sympathizers because they had not torn apart the camp, so a group of prisoners tore down an abandoned school. Eventually the Russians allowed air transports into their portion of Germany, and the camp was evacuated.