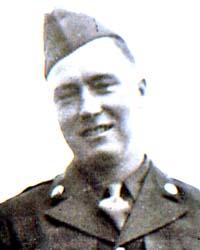 Clinton Sagers of Rush Valley, Utah was drafted five days before his 22nd birthday. His regiment was sent to Belgium and, on December 16, 1944, they took part in the beginning of the Battle of the Bulge.

The Germans bombarded the area knocking out tanks and killing scores of soldiers. At one point, he heard a swish and a bang as a mortar round just missed him. Wounded soldiers screamed but when buddies tried to help, they were mowed down.

For three days the battle raged, the soldiers going without sleep and little food. Sagers was hit by shrapnel below his knee. He continued to fight and was called on to take out three tanks. But as he looked out over the hill, he spotted more than 100 German Tiger tanks coming his way. Surrounded and losing men, the Americans broke their rifles and surrendered. They were marched to the rear without rest or water. When Sagers began to fall behind because of his wound, others told him the Germans were executing stragglers.

The prisoners were loaded into railroad cars which were later bombed by RAF planes attacking what they thought was a supply train. On Christmas Eve, a night so cold only body heat kept the captives alive, they all sang Christmas carols. On Christmas day each POW was given 1/6 kilo of bread and a canteen of water. The next day, the prisoners were fed again, 10 men sharing hot soup from one steel helmet. After nine days they entered a prison camp and were given their first bath in weeks. Sagers had the shrapnel removed from his leg and also found his cousin Robert, a fellow POW.

As fighting got closer, the Germans moved the POWs to East Prussia. On March 12, 1945, after hearing news of President Roosevelt’s death, they started a long march. One day a plane dropped leaflets instructing the guards to march the POWs to the Elbe River where U.S. soldiers were waiting. After four months of captivity, Sagers was liberated on April 26, 1945. He only weighed 120 pounds, but it was one of the happiest days of his life.