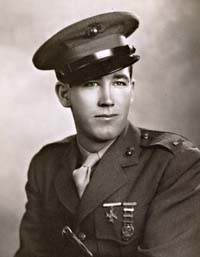 Maurice Briggs attended Officer Candidate School and was assigned as an artillery officer in the 2nd Marine Division. He was first sent to New Zealand, then returned to Hawaii to become executive officer of the 2nd Division Reserve Infantry Battalion. In June 1944 his battalion stormed ashore at Saipan in a diversionary landing. During the ensuing battle, Briggs was hit by a Japanese shell and subsequently lost his arm. While in the hospital, he was visited by two top commanders of the Pacific war, Admirals Chester Nimitz and William Halsey. He is a recipient of the Purple Heart and the Combat Infantry Badge and was discharged with the rank of captain.