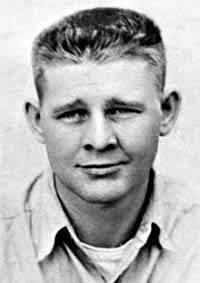 Ray Church joined the Marines before World War II and was assigned to the defense of Guam. On December 10, 1941, the Japanese attacked the island and the Marines fought until overwhelmed and were ordered to surrender. Church was shipped to Japan for slave labor and, in 1943, was transferred to a camp where food consisted of warehouse sweepings, full of rodent waste, straw and insects. In 1945, Church was working on the Osaka docks when American bombers attacked his barracks. On one occasion, he was splashed with napalm from a bomb and another prisoner smothered the flames. One morning, after forty-five months of starvation, disease and brutal imprisonment, the Japanese guards failed to show up and the war was over.