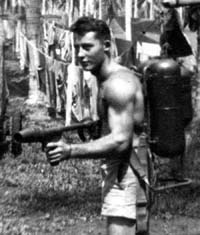 Gerald C. Glenn enlisted in the Marine Corps at age15. It was early in World War II when he joined his unit on Guadalcanal. Although trained on a flamethrower, he was also used as a scout. At New Britain, Sergeant Glenn, against orders, tried unsuccessfully to rescue a priest and two nuns behind enemy lines. He was reduced to corporal. He earned both a Silver Star and Purple Heart during action on Peleliu. On Okinawa, Glenn received a second Silver Star and a Purple Heart while rescuing wounded men under heavy fire. He re-enlisted at the outbreak of the Korean War and was assigned to training duties in California.