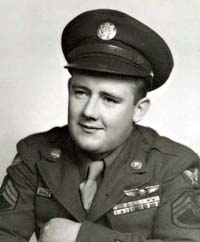 Vivian O. Johnson joined the Army Air Corps in 1940 and was assigned to duty in the Philippines. On December 8, 1941, the Japanese bombed U.S. bases. On Christmas Day, American troops pulled back into the Bataan Peninsula where they fought for months until completely exhausting their food and ammunition. Upon surrendering, Johnson was subjected to the brutalities of the infamous Bataan Death March. He spent most of his captivity at the Davao Penal Colony where he suffered 39 bouts of malaria and contracted beriberi. Later he spent a year as a slave laborer at a copper factory, and was finally liberated after forty-five months of brutal imprisonment.