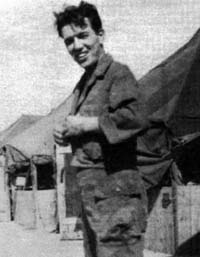 William F.X. McConnell entered the Army shortly after Pearl Harbor. In 1944, his 168th Engineer Combat Battalion was among the units assigned to stop the Germans at the Battle of the Bulge. Following the legendary fighting at the Bulge, the 168th was sent to Germany to attack enemy positions along the Rhine River. During repeated unsuccessful attempts to paddle across the swiftly flowing river in assault boats, McConnell was wounded three times. At one point, he gave his lifebelt to a fellow soldier even though McConnell himself did not know how to swim.