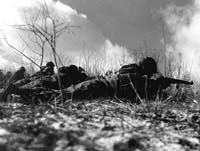 Sam Shimomura grew up in San Francisco. Shortly after the outbreak of World War II, he and his family were sent to rural Utah for internment at Topaz. Following his release two years later Shimomura was drafted into the U.S. Army, and later re-enlisted. He was assigned to Army intelligence as an interrogator in post-WWII Korea. Shortly after the Korean War erupted he volunteered for duty near the Chosin Reservoir. Shimomura was captured in December 1950 by Chinese forces in an ambush at Hell Fire Valley enroute to his assignment. He endured several tortuous marches and suffered frostbite. He escaped from captivity in April 1951 and was rescued by U.S. troops.