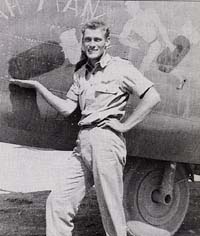 Walter Stewart was a student at the University of Utah where he was commissioned via ROTC early in World War II. He entered the Army Air Corp and was assigned as a B-24 pilot with the 8th Air Force. He had flown more that 30 combat missions when, in late July, 1943, he volunteered for an extremely hazardous mission against the German oil installation at Ploesti, Romania. Stewart was designated deputy force leader for an attacking force of 178 B-24 bombers manned by 1,700 airmen. His aircraft was in the first wave of the low-level attack, and was hit by hundreds of rounds of enemy fire. Stewart and his crew were able to nurse the severely damaged aircraft for hundreds of miles back to home base, but 54 other planes were lost that day and 645 American airmen were killed, wounded or captured. Stewart was awarded the Distinguished Service Cross for “extraordinary heroism at Ploesti.”