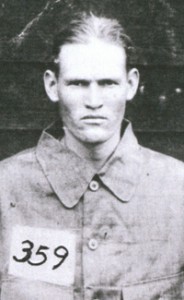 Allen Christensen, best known as Ace, was a farm boy from northern Utah. In September 1941, the Headquarters Squadron of the 5th Air Base Group at Fort Douglas – Ace’s unit – got orders to move out. In the same call-up was the 2nd Quartermaster Company to which Charlie Goodliffe, also from northern Utah, belonged. They didn’t know one another until later, when they were prisoners surviving in very similar circumstances.

Ace’s outfit was sent to Manila in the Philippines, arriving on Thanksgiving Day. Dinner was memorable: wieners and sauerkraut! On December 7 they learned of the Pearl Harbor attack. Although unequipped to fight a war, they held out for five months. On May 10 they were ordered to surrender. Had they known what lay ahead, they might have chosen another course.

Ace was first held in a penal colony, previously a jungle Alcatraz for Filipino prisoners. Although the POWs could grow food there, the Japanese would take it for themselves.

Eventually, they left the jungle only to be put aboard what were called “hell ships.” More than 1,000 already-suffering men were jammed into a ship’s hold, stacked in rough lumber tiers built so close together they couldn’t sit up or stretch out. About 400 stayed on deck. Conditions on the seagoing prison were horrendous, almost indescribable. The hell ship was well named.

One night they were awakened by gunfire. Someone said a colonel had jumped overboard. But the officer had arranged for a friend to throw his duffel bag over the side. When the guards rushed to one side and were shooting at the “body” in the water, the intrepid colonel slipped over the other side in the dark and got away. He was later identified as a Col. McGee who eventually became a leader in the American-Filipino guerrilla organization.

It took Ace until September 2, 1944 to reach Japan, due to the ship’s boiler problems and the threat of American submarines lurking enroute. Ace had survived life aboard three different hell ships since June 6.

In Japan Ace became a slave laborer in a copper smelter factory, breaking up slag with a 12-pound hammer even though he weighed only 85 pounds. After months went by, Ace was gradually beaten down in body and spirit and just about gave up fighting for his life. Then he turned to two valuable items he’d carefully kept hidden: a photo of his parents and his Patriarchal Blessing. From the depths of despair, he battled back and held on.

In June 1945, the prisoners saw the first American four-engine planes overhead and bombs started falling. The incendiary explosives created firestorms with winds of hurricane velocity but the POWs weren’t affected. Finally, after three-and-a-half years of captivity, Ace learned the war was over. Although his route home was not direct and took way too much time, it gave a chance to gain some weight and fill out his clothing. Of the 145 men that left Fort Douglas, only 45 returned four years later to the month.