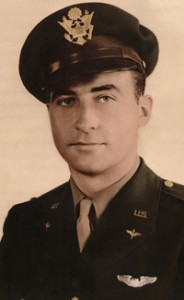 In the latter stages of World War II, the Japanese were battered ceaselessly in their home islands by long-range U.S. bombers. The mighty B-29s, which replaced B-17s and B-24s as America’s aerial workhorse, flying from the island of Saipan, were carrying tons of destruction over what had been once been considered a safe bastion from the ravages of war in the Pacific.

Ken Chidester was copilot of one such B-29 from the 881st Squadron, 73rd Bomb Wing. Those were boring but brutal flights for the big bombers, some as long as 17 hours, and culminating in gut-wrenching bomb runs into the teeth of Japanese antiaircraft gunfire. Losses from enemy action were extraordinarily high. Even when all went well, the crews faced the long flight home.

But all didn’t go well for Chidester, who was on the very first of what would eventually total 32 bombing missions. Prior to takeoff, Chidester told his pilot there was a problem with one engine, but his caution was ignored. His plane reached the target and dropped its bombs, but on the return flight the B-29 developed a runaway propeller problem resulting in a heavy fuel loss. There was no alternative: they had to ditch in the ocean, about halfway home. The landing was “heavy,” more of a crash really, that took the lives of three crewmen and the bombardier.

Chidester suffered a broken nose and a severe gash in his leg. Nonetheless, he got into a rubber raft away from the sinking plane. But soon he saw a fellow crewman, whose life jacket had not inflated, struggling to stay afloat. Without hesitation, Chidester rolled into the water, swam to the man’s side, and helped him back to the life raft.

The seven survivors of the ditching spent nearly two days in the tossing rubber raft before they were rescued by an American submarine.

Clifford B. Smith was the man rescued by Chidester. He wrote: “(Chidester) saved my life and enabled me to survive and see my six-month-old daughter” after the war ended.