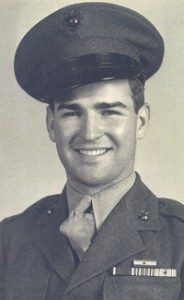 Raymond Casaday was only two years old when his father died in a mine disaster at Castle Gate, Utah. He was working in a smelter when Pearl Harbor was attacked. He joined the Marines early in 1942 following what he describes as “a strong sense of duty.” He was first assigned as a clerk in an amphibious tractor unit. He made corporal in six months and sergeant soon after.

After months of training, Casaday joined the Second Amphibious Tractor (Alligator) Battalion in Guadalcanal, and soon headed for Tarawa. The tiny atoll was part of America’s island-hopping campaign to drive the Japanese from strategic locations in the Pacific.

Casaday’s battalion was ordered to cross the half-mile-wide island and secure its airstrip. His “amtrac” with its load of marines was one of the first to reach the seawall where they met fierce resistance. As the troops unloaded, Casaday sprayed the area with machine gun fire. Then two grenades landed inside the Alligator and exploded. Casaday jumped out and took cover. He could see fellow marines as they came ashore in the face of murderous Japanese gun- and shellfire. “I saw ever so many marines fall,” he recalls. “So many bodies washed ashore the water was red.”

Then he spotted a wounded marine floating in the water. Despite being blinded in one eye and with severe wounds in his left arm from shrapnel, Casaday waded out and pulled the marine ashore. He yelled for a corpsman who applied first aid. Casaday was cradling the young marine and shedding tears of his own when a sniper fired. The bullet grazed Casaday but hit and killed the wounded man. It’s a memory that still haunts Casaday to this day.

It was only after the battle, which ranks as one of the fiercest of the war, that Casaday learned a fellow marine killed a Japanese soldier who was aiming a machine gun at him.

After hospitalization, Casaday was left with 87 pieces of shrapnel in his body and blindness in one eye. Over time, most of the shrapnel has left his body, either through surgery or in pieces on their own. But 12 pieces still remain. Of his survival Casaday says wryly: “I was too mean to be blown up.”

The 72-hour battle for Tarawa claimed 6,000 Japanese and 1,500 Americans. Casaday got a well-deserved Purple Heart. But if there were other medals awarded for his bravery, they were lost in moving. But to him they’re not important, certainly “not as important as my memories.”

Casaday was one of only three survivors in his unit of 67 men, and he may well be the last surviving marine from the initial amtrac assault on the island.