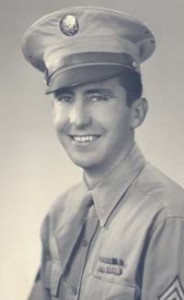 Ralph Wadley joined the Army early in 1941. After basic training he was assigned to the 2nd Battalion of the 25th Infantry Division, stationed in Pearl Harbor. Wadley was near Schofield Barracks on the morning of December 7, 1941, when a Japanese fighter pilot seemed to pick him and his brother out as targets. They dived behind a cement pillar as the fighter went by and riddled the pillar with bullets. He returned to his unit and was sent to Ford Island to set up machine gun positions for the expected invasion following the initial attack.

After months of intense training, his unit was sent to relieve the battered Marines on Guadalcanal. They landed on the beach and encountered the decimated First Marine Division. The following morning their unit charged up “Bloody Hill” and encountered many Japanese soldiers dug into tunnels between bunkers. Flame throwers were used to get them out. Wadley spent the next 21 days charging up hills against a formidable enemy, with little sleep and constant enemy encounters. He witnessed his comrades killed or wounded by enemy soldiers from hidden positions or from snipers tied to trees.

Wadley was awarded three battle stars, sharp-shooter and good conduct medals. His daughter nominated him for this honor from the University of Utah without his knowledge. He felt he was undeserving and was going to decline, but upon further urging, he accepted on behalf of “the 21 souls from Utah who were killed at Pearl Harbor and the hundreds who have been a part of the Pearl Harbor Survivors Association.”