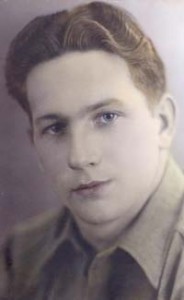 The history of Marler Allen Tibbitts is as much a story of true friendship as anything. It began in 1943, when he and Tom Kerr, both young men from Utah, were drafted into the Army and sent to Camp Walters, Texas for basic training. They soon became best friends and would remain so throughout the rest of their lives. Mr. Tibbitts requested that this University of Utah recognition be about both him and his dear friend.

Following intense paratrooper training, Tibbitts and Kerr boarded the Empress of Scotland to North Africa. In January 1944, they moved to the Airborne Training Center in Sicily and, in February, landed at Anzio, where fighting with the Germans had already begun. Tibbitts and Kerr were both hit by shrapnel during that battle.

In July 1944, they were assigned to guard a train-load of equipment being sent to Rome. After arriving in Rome, they took a truck to a camp southeast of the city, close to the Appian Way. Just before they shipped out, they discovered the Ardeantine Cave, which held a huge room with piles of clothing on one side and approximately five tiers of bodies stacked on the other side. Their discovery of the cave solved the mystery of missing Italians who had been hauled off in trucks by the Germans in an apparent act of revenge. Aside from telling their C.O., they kept this discovery to themselves to guard against possible retaliation.

In August 1944, Tibbitts and Kerr were part of the American forces that invaded southern France and were involved in several combat missions. They returned home in December 1945 and Tibbitts was awarded the Air Medal at Fort Douglas in 1947 for the mission into southern France. Though they made three parachute drops during the war and fought in several key battles, the massacre at the Ardeantine Cave lingers with Tibbitts to this day.