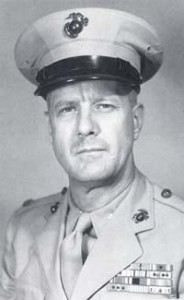 Robert D. Shaffer, wanted to join the military as far back as he can remember. In June of 1940, he enlisted in the Marine Corps. Upon graduation, he received his commission and was given a choice as to what kind of duty he wanted. He chose service afloat and was sent to Portsmouth, Virginia as a member of the 3rd Marine Detachment.

He was aboard the USS Hornet when it launched the historic Jimmy Doolittle Bombers for the raid on Tokyo in the early part of World War II, a mission approved by President Franklin D. Roosevelt himself. He was at the epic Battle of Midway.

Upon being promoted to Major, Shaffer was assigned to the USS Montpelier, a light cruiser, as a Marine Detachment Commander. The ship, with Shaffer aboard and in charge of the main anti-aircraft battery, fought at the battle of Rennel Island and supported the raid on the Kula Gulf. The ship then proceeded to the brutal and key battles of Guadalcanal, the Solomon Islands, and the Marianas.

Shortly after the fighting of WWII in the Pacific ended, Shaffer was sent to the small island of Chichi Jima to assist in the occupation of the Nampo Islands chain and the surrender and disarming of the thousands of Japanese soldiers still on the islands.

He then led an investigation into the brutal deaths of several American pilots and their crew who had crashed on or near Chichi Jima. His work led to the arrest and punishment of those in the Japanese Imperial Army and Navy responsible.

At the outbreak of the Korean War, Shaffer volunteered to go to Korea and was sent to command the 4th Artillery Battalion of the 11th Marine Regiment. Shaffer served in the U.S. Marines for 21 years. He was awarded numerous commendations for his service, including a Bronze Star and an Asiatic Pacific campaign ribbon with 8 battle stars.